Greece, Photo of My Day, Things to do, Travel Musings

Delphi is one of the most famous places for ancient Greece, and was considered the “navel of the earth.” Its importance was derived from the great temple to Apollo, where the female Oracle would spout gibberish induced by inhaling vapors rising from the earth, which was then interpreted by priests for those seeking information. Famous folks like Lysander, Philip II of Macedon, Cicero, and the emperor Nero consulted the Oracle, as well as many others. Her prophecies–proof of her communion with Apollo–were often vague. Think “horoscope” but for bigger questions.

After a very warm night (note to self: ALWAYS make sure Greek hotel rooms have AC before booking in summer), I rose at 6:15 to visit the ruins. The ruins of Delphi open at 7:30 a.m. and it’s worth buying the 9 euro combination ticket to the ruins and the museum, as the museum really does have a lot of spiffy stuff.

It’s also worth going early, especially if you’re there in the summer. Trust me. I’m from Arizona. Our summer temps often reach 115 F (46 C), and this summer in the Mediterranean it is FRIGGIN’ HOT. No joke. By the time I left the ruins around 8:45, I was really starting to sweat. Do yourself a favor, bring a big bottle of water, and go to the ruins early. If you have no interest in the museum, you can also visit the ruins late–they close at 6:30 or so on weekdays. The museum closes at 3 p.m. daily.

Because I had arrived so early, I was the first one to the site and was shortly followed by a young couple from Belarus. For the first thirty minutes or so, it was just us and the site caretakers. One thing to keep in mind: the site does have markers and explanations, but not for everything. If you’re really interested in the explanations behind the ruins, be sure to grab a guide book or hire a tour guide for the full rundown of Delphi! 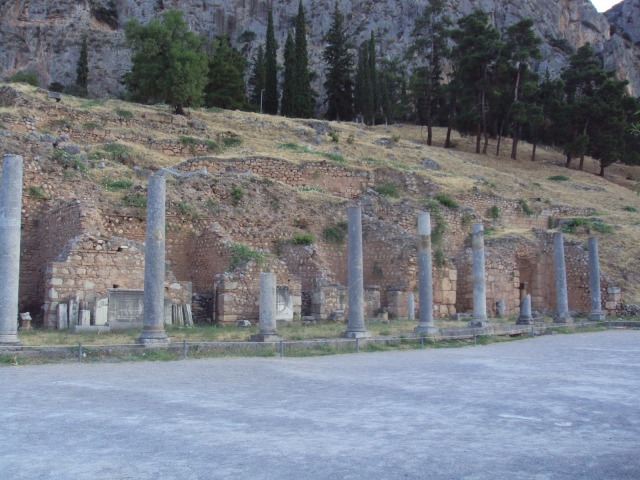 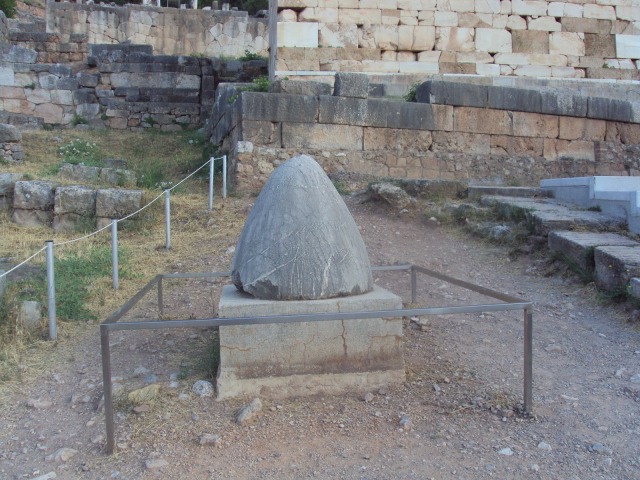 According to myth, Zeus wanted to find out where the center of the world was. His very scientific process was to loose two eagles and see where they met and drop a stone to mark its place. That place was Delphi. The stone, the omphalos, supposedly looked conical but had not been touched by man. The omphalos was important for the Pythia’s process of prophesying. It would be covered with a net and had decorations on it. This one is a replica, and many replicas had been made throughout the centuries. 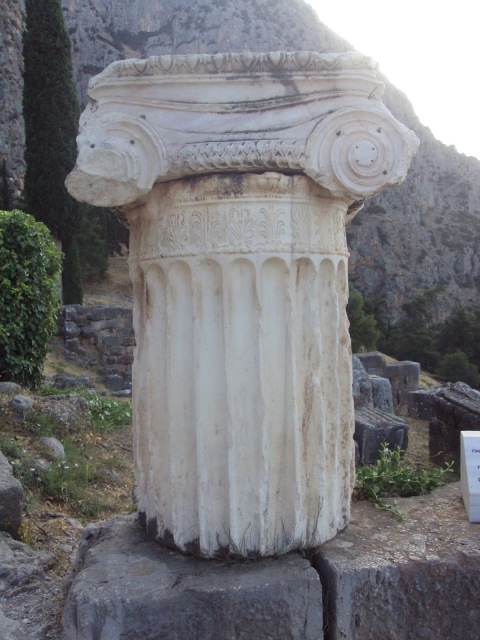 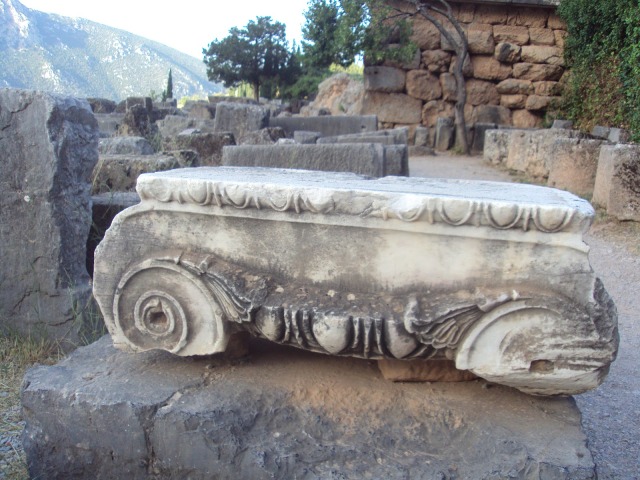 Other than being home to the oracle, Delphi was also home to the running of the Pythian Games, also known as the Delphic Games. These games were one of the four panhellenic games of Ancient Greece, and were held every four years. (Sound familiar? Well, the Panhellenic Games were the predecessors to the Olympic Games!) Events that took place at these games included chariot racing, wrestling, running,  javelin throwing, and more. The Delphic Games differed because they included artistic events sacred to Apollo: dance, drama, recitation, singing, and music!

Some shots from the museum:

Currently there is an exhibit touring the world called Myrtis: Face to Face With the Past. Basically, in the 1990’s, excavations unearthed remains from those in Athens who died from typhoid fever. One skull was particularly well preserved, so a professor from the University of Athens decided to reconstruct her face. The goal in touring this exhibit is, in part, to remind the world–especially the UN–of its goal to end poverty by 2015. “Myrtis,” as she is called, had died in the 5th century from the illness that killed about a third of Athens, the treatment for which at the time was unknown. Today, though, the World Health Organization estimates that 9 million children die a year from preventable and treatable diseases.

I enjoyed my early morning trip to the site, and the museum was curated very well. Obviously there were many other artifacts other than the ones posted, but these were what caught my eye the most. I also really did enjoy the Myrtis exhibit, as it explained not only how they recreated her, but also some essentials about archaeology that are accessible to the general public, including kids. Knowledge is power, people!

Ever been to Delphi? Do you have any tips to share?

8 thoughts on “The Ruins & Museum of Delphi (Mostly in Photos)”