In early December I made it to Northern Ireland as the last part of my Irish journey. I’ll post more about it soon, but in the meantime take a look at my photo collage from the rope bridge!

On December 7, 2012, I took part in my first ever dance competition, the inaugural Galway Lindy Hop Championships!To be clear, I’m not a huge fan of competing in dance. As I mentioned before, I don’t dance to compete, and that was partially why I was never a huge ballroom dancer. I dance for the music and the company and the fun. So when my buddy in Kilkenny suggested we compete, I refused at first. Sure, part of it had to do with saving face; after all, in most of the videos I’ve ever seen from comps at lindy events in the USA, the dancers are shazam good. Like, really. And I knew I wasn’t at that level of anything. I’m not a conscientious enough dancer, I don’t pay enough attention to technique, yadda yadda. But he was persuasive, as was another friend, and they assured me it’d be a supportive environment. It’d just be for the craic, after all. So I caved.

And so it was that I found myself being bussed to the Connemara Coast Hotel with a bunch of other dancers, most of whom I’d met along my travels through Ireland. The venue was very nice; along the coast of Ireland, they had decked out the ballroom with a lovely banner and the floor was a nice, live wood. Seeing so many familiar faces from nights out swing dancing in Cork, Dublin, Kilkenny and Galway made me feel better, although I was still nervous as heck!

I had signed up for 2 events: Jack & Jill, which is where you don’t know who your partner will be until the dance itself, and the Open Lindy–often also called a “strictly”–where you choose your partner beforehand. I was dancing with Rory, with whom I’d be dancing basically for 3 weeks straight only a short time before.

They finally called my heat to dance, and I was wildly nervous. So nervous, in fact, that although I was given 2 great leads to dance with, I totally let my butterflies get the best of me and didn’t allow myself to follow, or be creative, or basically do anything right at all (at least, that’s how it felt.)

Disclaimer: For some reason, some of these videos may not be visible in the USA. I’m not sure why…so sorry in advance if you can’t watch some of them! Also, if you’re interested in watching the whole competition–including fabulous solo charleston, great up-and-comers, and more, you can do so here at the Galway Swing YouTube channel!
END_OF_DOCUMENT_TOKEN_TO_BE_REPLACED

Ireland, Things to do

Kilkenny is a lovely city. Although small–about 24,000 people–it has a vibrant nightlife and good shopping, as well as some of the best Irish folk around. Here are 5 of my favorite things I did in Kilkenny, many of which I’ve posted about already.

Kilkenny Castle: The grounds alone are worth a trip to this gorgeous place. Spent your afternoon reading a book in the gardens, walk past the castle to the children’s park, or take a tour of the castle. Any of these options are a great way to spend some time in Kilkenny.
END_OF_DOCUMENT_TOKEN_TO_BE_REPLACED

One of my last days in Kilkenny, I decided to take a tour of the brewery of what has become one of my favorite beers: Smithwick’s.* What I liked about this tour is that it had really interesting information, a well informed and friendly guide, and a proper tasting at the end. You get a real pint, which you sample in the Smithwick’s Brewery bar, where normally I’d only get to go if I’ve been specially invited!

END_OF_DOCUMENT_TOKEN_TO_BE_REPLACED

Ok, so my tendency to get starstruck is quite high. Maybe higher than a lot of other folks. Basically, whenever I see/meet a celebrity, I either just get so excited that I”m afraid I’ll pass out (Exhibit A) or I just become incoherent, like that time I met Seth Rogen.

That being said, I always pounce on the opportunity to embarrass myself, so when I found out Nikolaj Coster-Waldau, aka Jaime Lannister from Game of Thrones, was going to be in Kilkenny for Subtitle, their first European film festival, I couldn’t resist trying to catch a sighting.

No, I didn’t get a chance to see any films in the festival (to be fair, I wanted to but it never quite worked with my schedule).

Yes, I paid 20 euro to watch awards being given to people whose work I hadn’t seen (sorry about that, again. I hear the festival was super.).

Yes, I felt like a bit of a poser. BUT, it was, as the Irish say, good craic. Some friends and I got gussied up, had a couple glasses of wine with some of Ireland’s finest (Jim Sheridan was there, whom I had to google but should have known), and enjoyed the awards ceremony, which was held in The Set, a really lovely theatre in Kilkenny.

My goal was to get a photo with the debonair Nikolaj. He arrived just before the awards began, and left almost immediately after. But not before I got a photo with him (technically) and ordered a drink at the bar next to him. Unlike my other undignified encounters with famous actors, I restrained myself. I didn’t interrupt him while we were at the bar as he chatted with one of the Romanian actors, but I did note that he had a Kindle in the same black case that I have. E-reader twinsies!

Here’s my photo with the Kingslayer.

Ok, so those of you who know me well know I hate the cold. I’m a desert gal, after all, so for most of my life if the temperature dropped below 75 it was cause for me to bust out a sweater. “Winter” in Tucson was almost always mild, and it’d be a stretch for us to don scarves and hats most of the time. “Boot weather” is defined very differently where I came from than where I’ve been traveling lately, considering the fact that boots here are likely more necessity than fashion choice.

I think I have made a decision, though. I like fall. A lot. I might even love fall, which has stunned me at every turn. I joke to people when I tell them where I”m from that I sound like a little kid running around here. “Ooh, look at the leaves! PRETTYYYYYYY! They’re so COLORFUL!” and people just laugh and shake their heads, kind of like when Kat & I were traveling in Scotland and marveled at the plethora of rainbows overhead every other day.

So why this change of heart? A picture is worth a thousand words, as they say. Here are a few to explain why autumn has seduced me.

My third Thanksgiving abroad went swimmingly. I accomplished so many things that I normally do on Thanksgiving:

END_OF_DOCUMENT_TOKEN_TO_BE_REPLACED

Today I took a bit of time to run over to Kilkenny Castle, one of the main attractions in my current town.

It was built in 1195 in Kilkenny, right on the river, and was initially home to the Pembrokes. At the end of the 14th century, the Butler clan bought it and owned it for more than 500 years; in the 1930’s, they immigrated to the USA and their family still lives in the Chicago area. The castle was sold  to the city of Kilkenny by the last Butler for 50 £ in 1967.

The castle itself was beautiful and old, and the exterior is a wonderfully haunting grey limestone. I’ll have to post photos later, as I went on a bit of a whim today and didn’t have my phone or camera.

The interior is grand and much had to be restored, because for 32 years the castle was uninhabited and dry rot corroded a lot of the building. They were able to restore the family’s drawing room to a replica, and their portrait and painting collection has been preserved, too. One of the cool pieces is a huge marble table in the reception room, which was also the family’s wake table where their deceased would rest for 3 days while family and friends would come and pay their respects.

My favorite tidbit I learned on the tour was about the “pole screens” that were in the drawing room. Basically, a pole screen is exactly what it sounds like: a little screen on a pole, often decorated, that was used to shield the ladies’ faces from the heat of the fire. They would use these to a) retain their ladylike complexions, and b) prevent their make-up, with a base of wax, from melting off. We get the phrase “saving face” from this.

The other thing I asked about at the end of the tour was, of course, the ghost stories. I had this romantic notion upon coming to Ireland that I’d query every barman in the old pubs about ghost stories of the pubs and such, and so far have been disappointed. At Kyteler’s Inn, which should have some killer ghost stories,* the bartender just shrugged and said he didn’t know any. Lame. The guide at the castle, though, had a few tidbits for me. Here they are:

The guide said that if they do have ghosts, they’re quite rude: they haven’t introduced themselves properly! 🙂
*The cool story  behind Kyteler’s Inn: Dame Alice de Kyteler was the first owner of the inn. She racked up a lot of dough and 4 husbands who all died under suspicious circumstances; after a while, she was accused of witchcraft and sentenced to be burned at the stake. Her handservant, Pitronella, ended up dying in her stead and Dame Alice fled to England, never to be heard from again. Shouldn’t a place like that have some good stories!? The ghost of Pitronella wandering around, looking for justice for her wrongful death?

END_OF_DOCUMENT_TOKEN_TO_BE_REPLACED

I took a fun tour the other day with Paddywagon Tours, and had a really great time. The guide was fun and informative, the other people on my tour were really nice, and the scenery was, of course, AMAZING! Here are some shots from along the way to give you an idea of why Ireland is now in the bunch for favorite places! 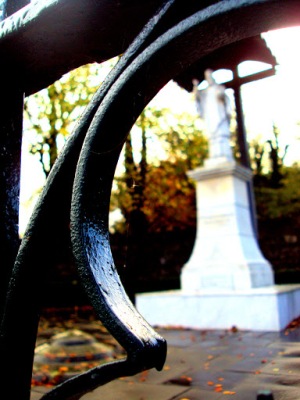