Greece, Things to do, Travel Musings

Finding things to do in Nafplio is not complicated, mostly because those things to do are simple and accessible! Way to go, Nafplio! (See, it even makes a sweet rhyme.) My arrival here, which entailed getting from Delphi to Athens to the Peloponnese via bus, metro, on foot, and by zeppelin (kidding), was duly rewarded by Nafplio itself; by the time I had made it from the KTEL station to my little hotel, I was already in love.

That being said, Nafplio is not really a backpacker’s tourist destination. That’s okay, since I’m not really a backpacker I guess, but I am on more of a budget than, say, the yachting French family who might spend a week in Nafplio, too.
So, here are my five favorite things that I did in Nafplio over the week that I was there (Monday-Friday), and they didn’t even break the bank.
1. Catch the sunset off the port. I know, I know, I’m becoming a bit obsessed with sunsets. So sue me, they’re pretty, okay!? Plus, they are perfect for photos, since the light here in Greece is A.MAZ.ING. But really, they are also worth watching, especially in a setting like this one. The first night I arrived in Nafplio, I walked down to the port and ambled along the promenade. There are many places to sit, whether you want to watch the sun going to bed from a water-side cafe with a coffee in hand, or just from one of the many benches along the way.
Cost? Free.  (Unless you take the cafe option, in which case, can be 3-6 euro, depending on your drink.)
2. Go to the beach. A couple beach options exist in Nafplio. If you want sandy, go to Karathona beach, which is accessible by bus and is maybe a fifteen minute bus ride. You can also take a 5-8 euro cab ride there and it’ll take less than 10 minutes. Or so I hear. I never made it there, because I really liked the rocky beach, Aravitia.
Aravitia is accessible on foot a couple different ways. For a less scenic route, head into town basically to the KTEL station, on Sigrou. When you’ve passed that, on the left is a little square with a statue in it; go that way and up, towards the stairs to the Palamidi Fortress. But, instead of working your buns on the stairs, keep going and you’ll hit the beach. There’s a snack bar, and umbrellas if you don’t bring your own. The water is so crystal clear that once in awhile when I was swimming, I’d see a fish and vaguely flail for a second before remembering that they’re not going to try to devour me.
The other way to get to Aravitia is a lot prettier, although depending on where you’re coming from, takes longer. Go to the port, and follow its curve, keeping the cafes, etc. on your left. Just keep going, past the playground, past the other swimming area, and along the walking path. It hugs the coast and the town, and is quite picturesque. You’ll usually see a sailboat or two going along. Keep going, and you’ll run into Aravitia Beach!
Cost? Free!  Note: Be sure to bring SUNBLOCK and a proper towel. Unless you’ve got shade, you won’t find any at the beach except for the paid umbrellas. Also, the rocks do get bloody hot, so spare yourself the discomfort and try to bring a terry cloth towel. (I’ve been using my coverup as a towel, and its just a thin layer of cotton, which did get particularly toasty, but not unbearable.)
3. Climb the 999 steps to see the Palamidi Fortress. Other than being a great workout (again, bring sunblock! And water!), climbing the steps to the fortress affords you a very cool view of the city of Nafplio. As you ascend, the little peninsular shape of the town comes into view, and you can see from yet another angle how incredible Greece’s landscape really is.
I really enjoyed exploring the fortress, which was built in the 18th century and before it was finished, fell to the Turks, but was later recaptured in 1822 by the Greeks. Not only is it huge, with eight bastions, it also is a historically important part of the city. One of the heroes from the War of Independence, Kolokotronis, supposedly was imprisoned there, and you can see where he was kept.
Plus, the view of the city and the sea is smashing. 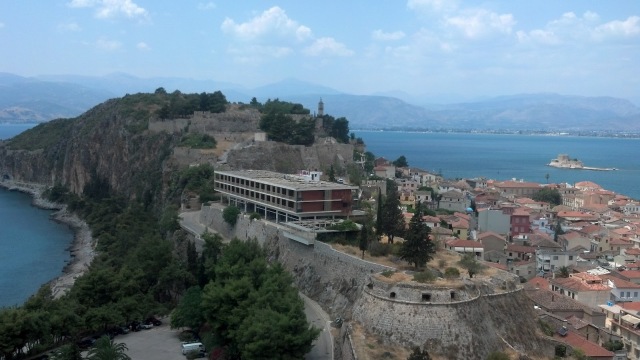 Cost? 4 euro. *
4. Go on a day-trip to Mycenae. What is Greece known for if not for its ruins? The austere glory of the Acropolis, the columns of Delphi, and don’t forget all the good stuff in the Peloponnese. If you took any kind of art history in high school (or college, or whenever), Mycenae should ring a bell. It’s where they found the “funerary mask” of Agamemnon, and the famous Lion’s Gate still stands.

If art isn’t your thing, then maybe epic Greek poetry is. If the names Agamemnon, Orestes, Clytemnestera, or Iphegeneia sound familiar, Mycenae is supposedly the place where they hung out.

In any case, the ruins are fun to explore, especially if you have an interest in ancient history. Mycenae’s structures date back to the 16th century BCE, and include grave circles, a cistern, remnants of house layouts, a granary, the lion’s gate, the treasury of Atreus, and, of course, the palace.

Again, be sure to bring a hat and water, as there is minimal shade on the citadel. The KTEL bus from Nafplio to Mycenae (look for Mykenes on the bus) takes you right to the site in just about an hour, and runs 3 or 4 times a day.

5. Go (Window) Shopping by the port. Nafplio really is one of those places where you can be happy just to walk around, especially in the evening time, around 7:30 or 8. One day I was here I just read my book in approximately 4 different places, just walking, sitting, reading, eating. Walk along the streets to check out clothing stores, jewelry shops, a leather shoe store where the craftsman works on the shoes right in front of your eyes. Grab the best gelato in Nafplio from Antica Gelateria di Roma (2.50 euro for a small cup of 2 flavors*), check out the only worry-bead museum in the world (3 euro or free for students with an ID*), or just people-watch as you meander through the streets.*Prices are as of July 2012
This post was linked to Pretty Travels Volume 2: Sun, Sea & Sand!

7 thoughts on “My Favorite Five: Things to Do in Nafplio, Greece (On a Budget)”