Things to do, Travel Musings, Turkey

When I think of a palace, I think of Disney. And lush gardens, and over-the-top architecture, and lots of bling. Although my trip to Topkapı didn’t include a Cinderella sighting (I suppose that’d be more of a castle, wouldn’t it? Is there a difference? Someone help me out with this…), I was certainly impressed by its grandeur.But wait…Topkapwha?
Here are the basics:

Obviously there is a lot more history and information about the palace, but you get the idea. The people who lived on the palace grounds essentially never had to leave–they had everything they needed there!

The Gate of Salutation leads into the second courtyard, and only people arriving on official business could pass through it.

In the second courtyard were the kitchens, treasury, Tower of Justice, stables, some living quarters and the Imperial Council.
Because the palace is a museum today, the treasury is used to display a selection of jewels and gifts from other countries given to the sultans over the years. Remember how I mentioned that when I thought palace, I thought “bling”? Well, the sultans had it in spades.
Most of the interiors within the palace didn’t allow photography, so I’m afraid I don’t have any photos of the rubies and jade and amethyst that the sultans once owned. Sorry.

The Gate of Felicity leads into the next courtyard, and is Rococo style.

This third courtyard was home to privy chambers, a library, the room where the sultan received his audiences, a mosque, the pages’ dorm, and the harem, which was where the sultan’s mother, concubines and family lived. The harem alone has more than 400 rooms! It also costs extra to visit, so I didn’t go in.

My favorite parts were the religious relics. I’ve seen a lot of relics from Catholic saints in Italy–Catherine of Siena’s head and finger, for example–but the relics kept at Topkapı are wayyy more ancient.

Like, ya know Moses? The dude who parted the Red Sea with his staff. So, that’s there.

How about Abraham? There’s a pot of his, and a turban of Joseph’s.

And David’s sword (yes, of David & Goliath) is there as well. Before this trip, any time I thought of David, I’d think of this:

Or the song “Hallelujah.” The Jeff Buckley version.

Also, some of the most holy relics of the Prophet Mohammad, like a cloak, swords, a tooth, some hair, and other belongings that people make pilgrimages to see.

It was really cool to see these relics, particularly because these figures are so prominent in so many religions.

My other favorite room was where all the clocks were kept. I am just now realizing why that’s funny (as a kid, my mom jokingly called me Big Ben sometimes because I was obsessed with  nagging being punctual). Clocks are really beautiful, though, and can come in all shapes and sizes and levels of ornamentation.

Again, no photos were permitted and there were guards in every room, but trust me when I say they were spectacular. Little pocketwatches and clocks ten feet tall, some carved with meticulous detail, others with more bold, sweeping designs. Masters of clockmaking in the sultan’s times could spend a lifetime making a single clock. That’s how bomb these creations were.

More than anything, though, I was just wowed by the intricate designs and visceral colors! Blue just doesn’t get any more vibrant.

In the fourth courtyard, there are a series of kiosks that served different purposes. Some were religious in nature, others for relaxation or watching sports, but all of them showcased the power of the sultan and the prowess of his architects. 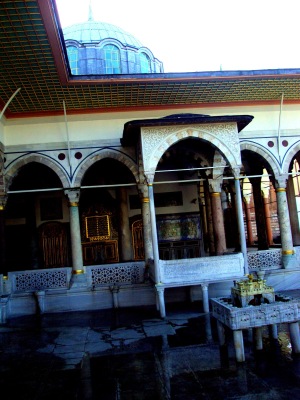 Another view of the water and the skyline of Istanbul. This time, you can see Galata Tower in the distance. 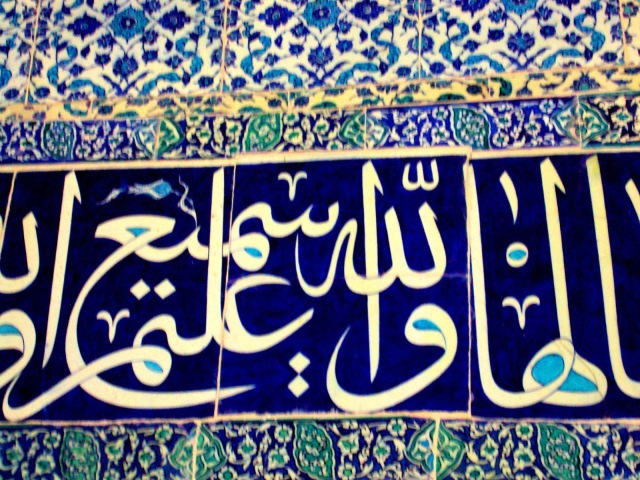 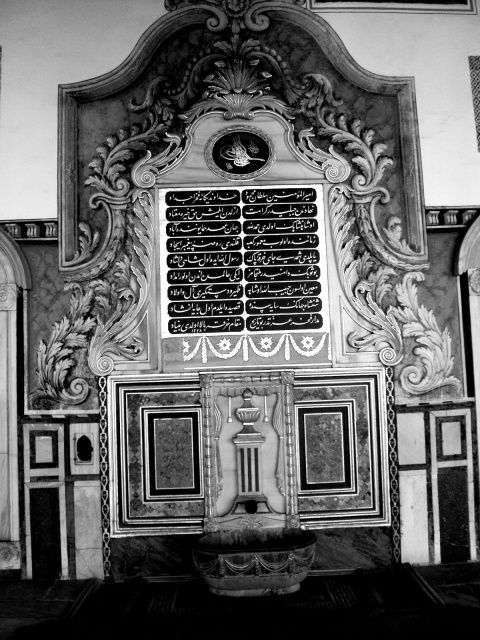 So there you have it! My trip to Topkapı! The lessons I learned from this little expedition are that:

Have you ever been to a palace? What did you think? Share in the comments below!

1 thought on “Topkapı Palace: Stomping Grounds of the Ottoman Sultans”