food, Things to do, Turkey

If you’ve been following along, you may have noticed that I like food. I mean, who doesn’t? Food is awesome. It tastes good (most of the time), it’s fun to make, and it gives you energy to keep doing cool stuff like hike Mount Olympus or dance the lindy hop.

My boyfriend does give me a lot of flack for taking photos of the food I eat, and I confess that a lot of my recent Instagrams have featured food. 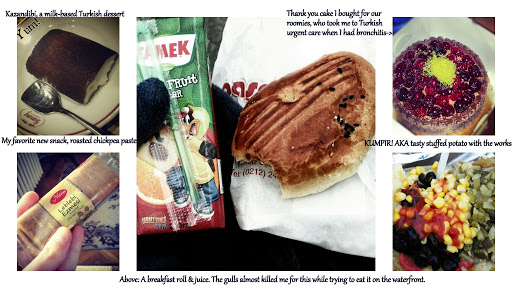 Anyway, you get the picture. So for Christmas, I decided to take a half-day cooking class here in Istanbul.

There are a number of companies who offer Turkish cooking classes. All of them last approximately 4-5 hours, depending on how long the meal lasts, and the price was about the same. I decided to go with Cooking Alaturka because I was paying in Turkish lira, and it was cheaper than the rates I had seen for some other courses listed in Euro.

I had a very positive correspondence with the owner about my reservation and what menu I wanted to do, and although she was not going to be running the class, her substitute, Kim, was wonderful.

I decided to do the meze menu, which was in the morning and would conclude with lunch.

The word “meze” tells us a lot about what they are! It originally comes from the Persian word for “snack,” and that’s kind of what meze are in Turkey, as well as in the Balkans, Middle East and Greece. They’re essentially small dishes that can be served with or without drinks–kind of like tapas, but they can also be served as side dishes to main courses, which tapas usually aren’t.

I thought the menu would be accessible, and that it’d be more likely I would use the recipes in the future for things like dinner party appetizers or potlucks. The other menus looked pretty amazing, though, too!

So what did we make?

I won’t post the recipes (that’s part of paying for the class, I suppose), but you can certainly find some good ones online.

Ok, be that way! But what was it like?

Overall, it was really fun! I went on my own, and arrived in Sultanahmet (where the tourist center of Istanbul is) at 10:15. For me, that meant commuting for a little more than an hour but most tourists stay in Sultanahmet so the location for them was really handy. Class was to begin at 10:30, and they wanted us to look over the recipes and have some tea while we were meeting the other participants.

My group had a really nice young couple from New Zealand, a middle-aged man from the US, and a pair of Japanese women, one of whom was an Italian cooking instructor in Fukushima! Skill level varied a lot–obviously the cooking instructor knew her way around a kitchen, and the Kiwi gal told me she had done cooking classes in almost every country they had traveled to, which sounded like a lot of fun. Then, there were people like me who cook for fun, and the other American dude who was a wine-lover and wanted to learn a bit more about Turkish cuisine.

We went over the menu together with the instructor, while the chef finished prep in the kitchen. Then, we got to work. Because we were doing 5 dishes with varying levels of cook time and prep, we divided up tasks and worked on different parts of different dishes.

One of my favorite dishes–and the most basic–was the pureed eggplant, which is just a spread for pita or regular bread. They get roasted over an open flame and you have to skin them before mashing them up. Tip: leave the stem on so you can use it to hold the eggplant while you skin it! It’ll keep your fingers from getting too toasty! 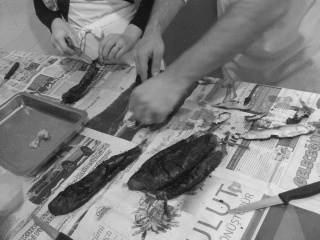 I love köfte, but usually I eat the meat version. These spicy lentil balls were also delicious, plus they’re vegetarian and a lot more healthful!

One of my favorite things I learned how to do was roll the dolmas! 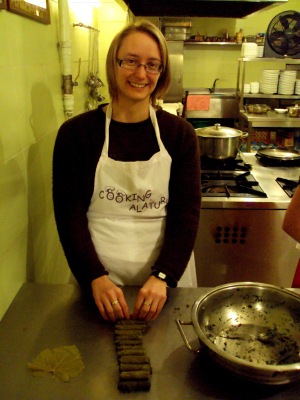 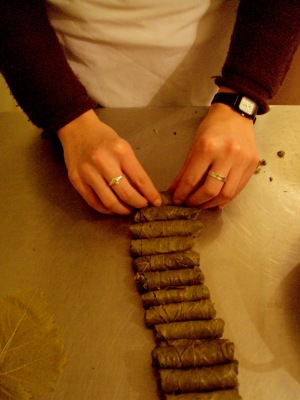 Tip: Be sure to press down while you roll to make sure the grape leaf stays airtight and won’t fall apart!

It’s also important to check your grape leaves and patch the ones that have big holes. You can use a leaf that has too many holes, cut it up and place it just like you learned how in kindergarten when playing with papier-mâché.

Another favorite thing was WIELDING A COMICALLY LARGE KNIFE! So this is how chefs are so efficient in the kitchen! I chopped up some parsley with this megablade, and it went a lot faster than when I do it at home, that’s for sure!

Here was our delicious, finished product! It took 6 students, 1 chef and 1 instructor about 4 hours to make all these dishes, and parts had been prepped the night before.

The nice thing about these dishes is that most of them were vegetarian, and if they weren’t, they could be (i.e. skip the cured beef on the baked hummus). For gluten intolerant folks, the spicy lentil balls are good, as is the eggplant and humus; the chicken dish did have bread in it, believe it or not (helps with texture). The cookies might be able to use substituted ingredients for the wheat products.

After we finished cooking, we sat down to eat our creation! With classes like this, you usually get a couple drinks included in the price. We enjoyed nice conversation over a couple glasses of wine and the meal lasted about an hour-and-a-half.


Things to keep in mind when signing up for a cooking class while traveling:

You’re not going to be preparing the whole meal all by yourself. If you want that, enroll for a real course instead of a half-day class. A lot of the ingredients had been prepped the night before (i.e. soaking the lentils), and there was a chef doing a lot of the work with us. Obviously people don’t want to pay good money for a 5 course meal and then muck it up themselves and not get to enjoy it. The chef is there to prevent that and make sure the meal turns out well–that does NOT mean you’ll be able to replicate it your first time in the kitchen.

Eat a light meal before but don’t stuff yourself. I had a light breakfast because I get really mean when I’m hungry (just as Boris) and I knew we wouldn’t be eating until about 2:30. You’ll get to taste bits and bobs as you go, but don’t rely on that to stave you over if you have a tendency to get low blood sugar.

Dress appropriately. That doesn’t mean worry about plunging necklines or anything, but it does mean don’t wear your Sunday best to a class where you might get a bit dirty. Aprons should be provided, but accidents happen.

Also, wear comfortable shoes–you’ll be standing up for hours–and ladies, be sure to bring a hair band! I managed to lose my hair ties en route from getting up in the morning to the class, and although my hair isn’t really long it definitely bothered me. Plus, hygiene! Nobody likes finding hair in their food!

Keep in mind that it’s geared to tourists. For some people, this might be a problem. The owner and main instructor for Cooking Alaturka is Turkish, and her chef is Turkish, but sometimes instructors aren’t from the country for the cuisine. Take that for what you will–our instructor that day was American, but had been living in Turkey for 15 years.

Generally, I’d say it’s better if the people you’re learning from are natives, but at a certain point, food is food. I learned how to make amazing tiramisu from one of my favorite Italians and have made it so many times since that I know the recipe by heart. Does that make my tiramisu less authentic than hers? Maybe.  You’ll have to taste it to decide. 🙂

It’s not cheap. The rate for this class is 140 TRY, which is about $80 right now. This class was a splurge for me, and would be for most budget travelers. The girl who had taken many other cooking classes while traveling confirmed that prices were about the same in most countries she had gone.

Was it worth it? For me, yes. I like the whole “teach a man to fish” idea, and if I apply that, I learned how to fish 5 different ways that day! And I ate a 5 course lunch with 2 glasses of wine that otherwise might have been expensive.

Plus, it was fun and for a solo female traveler, it’s a great (and super safe) way to meet other travelers!

What about you? Have you ever taken any classes abroad? Would you recommend it for others? Share in the comments below!

If you liked this post, please consider liking Bumblings of Miss Button on Facebook, circling me on Google +, tweeting with me or finding me on Instagram!

This post was not sponsored by or affiliated with Cooking Alaturka; all opinions are my own.