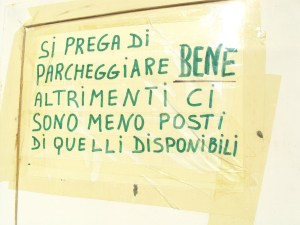 This sign, in Terontola, says, “Please park WELL otherwise there are fewer spots out of those available.” Never did I ever believe I would see something like this in Italy…

Tuesday we decided to venture out to the annual EuroChocolate festival in Perugia, which sees about a million visitors in a single week. Although Perugia itself is only about 45 minutes-1 hour away from Orvieto by car, it’s on a different train line, so the trip duration is closer to 2-3 hours. We left Orvieto around 10:15, armed with a picnic lunch, because we weren’t due in to Perugia until 1pm. Terontola was where our trains swapped, and we had about an hour to kill before the one due in the Foligno direction arrived. Terontola is near Cortona, but from what we saw, seems to be purely residential with a few shops. It lacks the ancient charm that our rupestral home has, and we were disappointed in the dearth of entertaining activities we initially encountered in our free time. We passed by a couple cafes, a veterinarian, and finally found a small park. The local outdoor market was starting to close, but we wandered through—noting how much bigger and better “ours” was—and then proceeded to the small playground adjacent to the parking lot where the vendors had set up shop. After requisite playing with the half-broken teeter-totter and swings, we ate lunch at a tiny picnic table built for the wee ones.

On the way back to the train platform, we ran into a woman who had been on our first train and whom Jeremy had helped with her luggage. We helped her again, and it turned out she was an American who had been coming to Italy once a year for the past 25 years. She had been a Latin, Greek and Italian teacher at a high school in western Massachusetts. She was also headed for Perugia, and was so grateful for our help with her luggage that she invited us to share the cab up to the city center and insisted to paid for our trip! See, kids, it helps to be kind!

Upon arrival into the city center, we were bombarded with all things chocolate. Booths were set up by every chocolate company imaginable, from local chocolates to Perugina to Toblerone. Every flavor and form imaginable presented itself to us—chocolate in graters like Parmesan cheese, for easy choco-grating action! Fruit covered in chocolate! Chocolate piadine! Chocolate kebabs! Chocolate, chocolate, chocolate. The Italian army had a climbing wall set up—if you climbed it, you got free chocolate. (We did. Unfortunately, nobody got a picture, and Jeremy was too quick for me to take a photo of him doing it because by the time I had found the camera in my purse, he was at the top!) There were sack races for free chocolate, guessing games for free chocolate, and you could, of course, pay for chocolate, too. The three of us tried chocolate grappa (Grainne and I actually just tried amarone grappa in a chocolate cup) and I remembered why I hate grappa. We also bought one of the Chocolate Kebabs—the “pita” was that sweet Spanish bread, with chocolate and hazelnut shavings and whipped cream. Yum! But overpriced. We wandered through all the stalls, admiring the smells and tastes and visions.

Eventually we came across the need for something salty, so we ate a pizza snack on the steps in front of the archaeological museum. Then, we went to Chocolate School! Perugina was doing a free “lesson” in how to make chocolate, which meant we got to sit in a warm tent and watch while a real chocolatier made ganache-filled chocolates and showed us how. And we got to taste them. From what I gathered, the temperature of the chocolate is imperative in its perfection. If it’s not the right temperature, it doesn’t have the right texture or consistency. Grainne was randomly chosen as being a graduate of the Scuola di Cioccolato! Here we are with the chocolatier, Alberto:

All in all, it was a successful day trip. Now, Grainne is off to Rome to do more research, and Jeremy and I will be heading to Milan tomorrow to see the duomo and visit some friends in Pavia, just south of Milano. It is strange to have this option: to go to Milan, by train, for an overnight trip. The weather is supposed to be beastly, but I’m sure we’ll have another adventure, nonetheless.