Tuesday was a busy day, but not because we had anything specific planned. Mostly it was because we walked around a lot. First stop, Lafayette Cemetery #1. The cemeteries here are reminiscent of European ones in that they’re mostly above ground Mausoleum -style tombs. Three crows perched on a tomb as we wandered through the aisles of the dead. Some headstones were so old to have lost their names, others were etched in clearly. When I was a child I always found cemeteries to be eerie, but since living next to one while digging in Italy, I’ve started to appreciate their beautiful quiet. 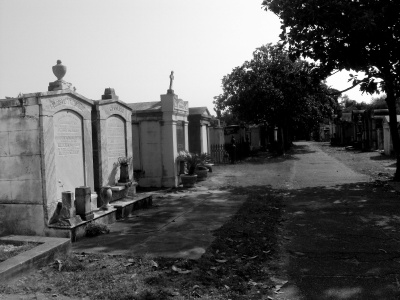 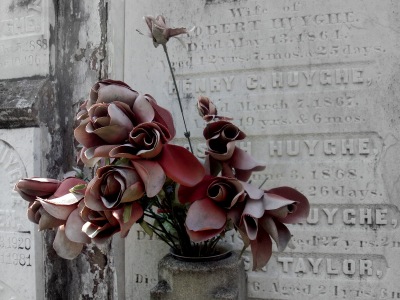 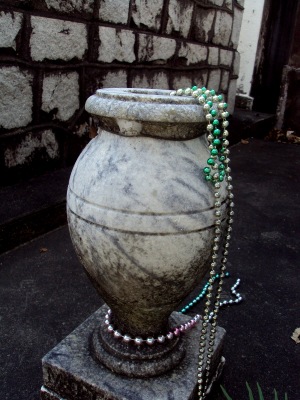 From there, we took the streetcar down to Canal St and wandered around the French Quarter, popping into galleries and antique shops to cool off and admire the wares. One shop we perused featured dozens of antique chandeliers; checking the price tag, I saw a loopy $450,000 cursived on. Boris and I estimated that the ceiling in that shop alone was worth approximately a jillion dollars.

As we sought a place for lunch, we spotted a postman taking a break by his truck. In true Boris fashion, we asked him where he, being a local, would recommend eating. He named a few places, and we found one: Desire. Continuing on our streak of eating local cuisine, Boris ordered a gator burger and I got a fried catfish po’boy. We weren’t disappointed, although I think I was initially confused about what makes a sandwich a po’boy. We asked the waitress, who said it had to do with the bread, and upon further research (thanks, Wikipedia ), we discovered that all it really was was a sandwich with meat or seafood, a type of baguette- ish bread and pickles, sauce, lettuce & tomato. Basically, a Louisiana sub.

Our trek continued back to where our ghost tour had led us the previous night, St. Jack’s Square. A giant sculpture of Andrew Jackson on a horse rears up in front of the cathedral; in front of the church fortune tellers camp out to give palm readings, and on the other side, horse & carriage tours wait under the sun to entice tourists to go on a buggy tour of the French Quarter.

We walked down along the river side to the French Market, where we ogled the gator jerky, jewelry and chatted with a nice young woman who sold natural spa products. I bought a floppy straw hat, which was much needed considering the fact that a) I had brought mostly sundresses to wear and b) forgot to pack sunscreen. (Don’t worry, Mom, we got some at the drug store later.)

Eventually, we strolled back to a trolley stop and took it to the Garden District, only to get off a little earlier than we meant. At least I got some gelato out of it… Dinner that night was a delicious steak cookout with some of Helen’s coworkers. Boris helped man the grill, and we ate well and enjoyed good company. Whew!