To start off, I have to be clear: I spent a piddly amount of time in Croatia, so this is by no means a definitive list. We were there for about 6 days, and only hung out in Zagreb and Zadar.

That being said, we literally didn’t have a bum meal, so I want to share the top five dining experiences I had in those two places, with the clear hope that I will come back and eat/sail/wander my way through the rest of this country. Here they are, in order of awesomeness from less awesome to super awesome. But all pretty awesome.

Fancy dinner out in Croatia!

Located right next to the famous Stone Gate, Trilogija serves up seasonal and scrumptious dishes based on that day’s market finds, so the menu changes daily. When we went in, we tried the two soups of the day (mine was an amazing spinach-based veggie soup, and Boris had a killer fish soup) and split a grilled cheese with truffle. Not too shabby.

The only issue I had was that there was a weird scented candle thing going on, which is a huge no-no for diners. I want to walk in and smell food, not my dentist’s office bathroom.

We got into Zadar in the evening, and off-season in the Old Town meant the streets were deserted by 8 p.m. We didn’t know where to eat, but we passed La Canzone, and it looked promising. We didn’t even realize that the grill was part of the trattoria across the street until we left, but had the most amazing grilled meat there. Plus, it must have been happy hour or something because each dish was 20% off and the whole dinner was absurdly cheap.

I noticed there are a number of ho-hum reviews on the TripAdvisor site for this place; I can’t speak for the quality of the trattoria, but the grill really was exceptional.

Not only did this place have friendly service, they had the best gnocchi of the trip (trust me, Boris is an expert at gnocchi assessment, he’s ordered enough of it) and the daily menu was plenty for only 55 kuna.

My friend Grace recommended this place to us for their bučnica, a flaky pastry filled with melted cheese and squash. Basically the best hot pocket of your life. It turned out that this was also the best bakery we ate at in Croatia, and we managed to return every day we were in Zagreb for breakfast of bučnica, strudel, and possibly the most luscious hot chocolate I’ve ever had. And a huge thank you to Grace for her many amazing recs for Zagreb! 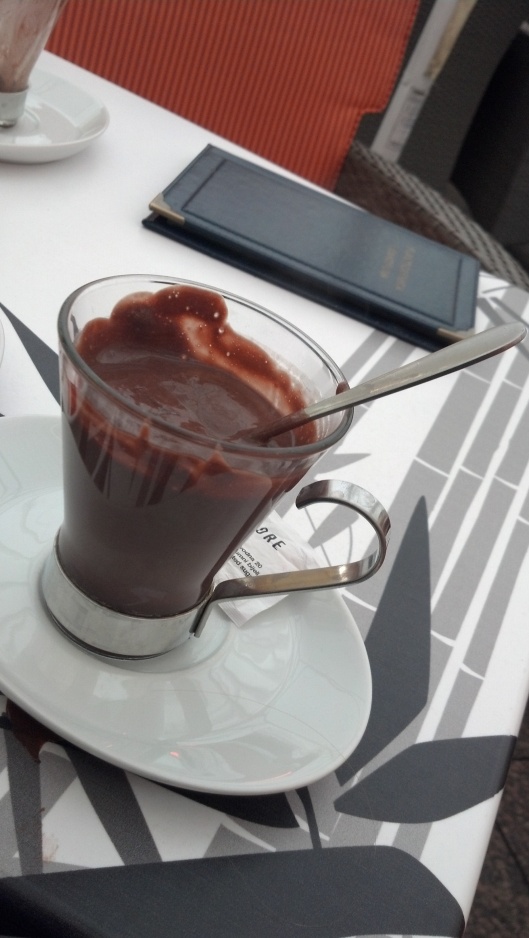 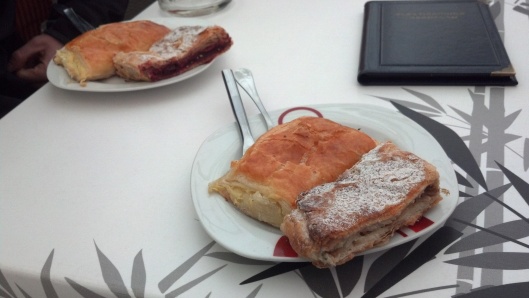 Bucnica on the left, strudel on the right. Baked goods? More like Baked GREATS! Har, har.

This was another gem we were recommended by a local, located in a side street between the cathedral and just off the market square. Definitely a winner for best bang for our buck, and the best lasagna I’ve ever eaten. We also had the biggest “small” calzone of all time. Service here is not always the most attentive, but it became part of the character. We returned to eat at Nokturno, and when I’m back in Zagreb I will totally go back, if only for the gorgonzola lasagna.

This is the ‘small.’ How huge is the large!?

Had my first sips of Croatian wine from this adorable baby bottle of vino!

More than anything, I loved the concept of this Croatian chain (locations in Zagreb, Rijeka, Opatija, Banja Luka). Gourmet hot chocolate and pastries, but with a twist: an actual chocolate bar. As in, booze with your bonbon-flavored cocoa. A bit pricey, but a cool idea that I hope catches on elsewhere. The atmosphere was also really nice, and would be a good place to go for those who are tired of yelling at each other over bar music but still want to get a sweet buzz. Literally.

Our stay in Zadar during the ultimate off-season was short and sweet. Two different locals recommended Bruschetta to us, and although it was definitely pricier than the rest of the places we ate in Croatia, it earned its price tag. With a view of the water and a scrumptious Italian menu, we couldn’t complain at the end of the meal.

There used to be ravioli in truffle sauce on this plate. But I ate it.

Pirate-themed restaurant serving Mexican food. ‘Nuff said. (And for those of you who are wondering, it’s not quite authentic but it’s a worthy effort. Plus, the atmosphere is great–loved the Latin tunes in the background–and the service is really friendly.)

1 thought on “Favorite 5: Places I Ate in Croatia”