For the past six weeks I’ve been admiring other travel bloggers’ submissions to Travel Supermarket’s Capture the Colour Photo Contest.  Anyone can enter, but for some reason it took me until today to decide to do so using photos I’ve taken in the past few months. I was timid about not having my many photos from previous years on this computer, but now I guess I have a number of shots that are more worth including. Besides, it’s a really fun contest idea and it has a load of great prizes.
Red: Ayvalik, Turkey. We had just taken an 8-hour bus ride from Istanbul, and were ready to resume our tradition of watching sunsets. The first glimpse we caught of it was from a tiny alley just off the water, and I practically started running to the shore when I saw how brilliant the colors were, evident just from the reflections in the car windshield. Needless to say, the sunset itself did not disappoint, but part of the beauty was the teaser that got us there.

Blue: Ankara, Turkey. We were being guided by our friend’s good-natured brother (in the navy shirt in the back), and he was the perfect embodiment of Turkish hospitality. We became fast friends with him, and he happily did everyday things with us, like taking my boyfriend (in the blue smock) to his first Turkish barber shop for a beard trim.

Yellow: Sonoma County, California. I had recently quit my job to travel and write for a year, and my extended family decided to take a trip to northern California. It would be the first time that I would fly abroad and they would not be able to see me off due to the trip, so every day we spent together was truly precious. This photo was taken at one of the beaches near our rental in Jenner. At the time of this photo being taken, my father was ten feet away from me creating beautiful sand art and my mother was reading under the umbrella. It was a beautiful day, and the sands were dotted with the bodies of jellyfish. 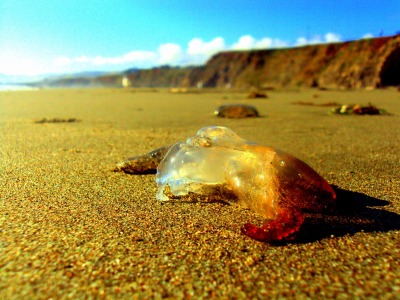 White: Thessaloniki, Greece. We had taken a bus to the top of the town and explored, eating fruit and people-watching in a tiny square before meandering some more. Greece is home to many white-washed buildings and many stray cats, and here I found it fitting that we spotted both complimenting each other. The cat slunk through the alleyway with the power of a miniature panther. 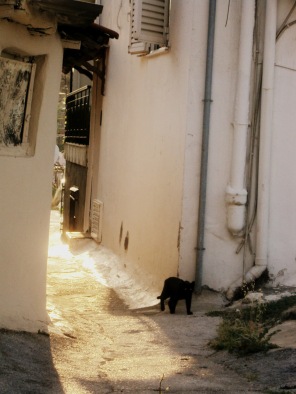 Green: Isle of Skye, Scotland. It was our first day near Glen Brittle on the Isle of Skye, and we had been told that among the countless sheep dotting the countryside there were also ruins of a clan long-established in the area. We ran into another hiker and he joined us for the trek, even giving us a lift to the trail head after having known us for 10 minutes. Here the stone remains look out onto the abundant green overgrowth in what had once been the courtyard of the castle. 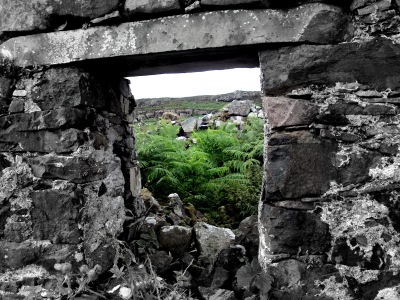 And now, as part of the contest, I nominate 5 fellow bloggers to participate in Capture the Colour. Sorry for the late notices, guys.

We arrived in Ayvalik and found a pension just in time for sunset. Walking towards the water, we first saw this: 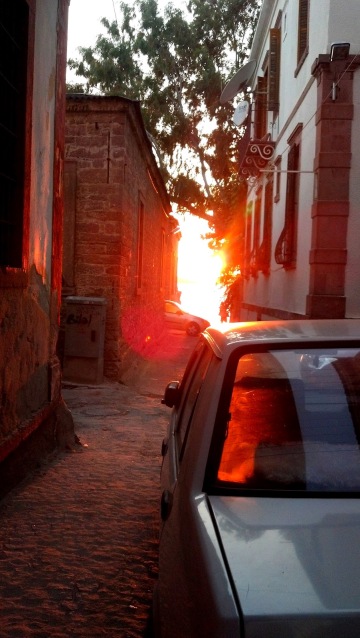 I snapped a photo with my phone and started speed walking towards the little spot of shore we saw from the alley.

This is what our first evening in Ayvalik really began with. 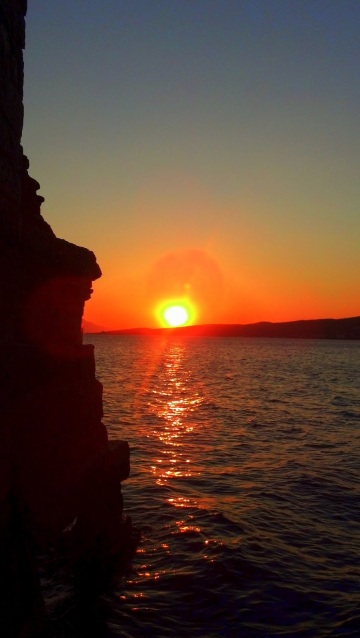 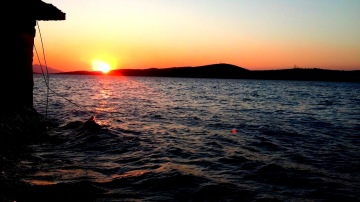 Greece is a maritime kind of place, and the Temple of Poseidon at Cape Sounion is one of the best examples of their enduring devotion to Poseidon, god of the sea. Built around the 440s BCE, the temple is of Doric order and only 15 of the original 42 columns stand today. As is the norm in Greek temples, a huge cult statue of Poseidon would sit in the naos (the worship area), where his gold-leafed, bronze-hearted self would chill.
The ruins of the temple are nice, but the best part about it is really the setting. The drive from Athens to Sounio–if you take the scenic route, along the water–takes about 45 minutes or so. From the temple, located on the southernmost tip of the Attika peninsula, the views of the water are grand.
Lately(especially after my trip to Scotland) I’ve been realizing that, despite my desire to be a writer, some things just cannot be explained, especially certain levels of beauty, which is such a subjective thing anyway. So, as a picture is worth a thousand words, check out the photos I took on our little trip to Sounion. Hopefully they will suffice. 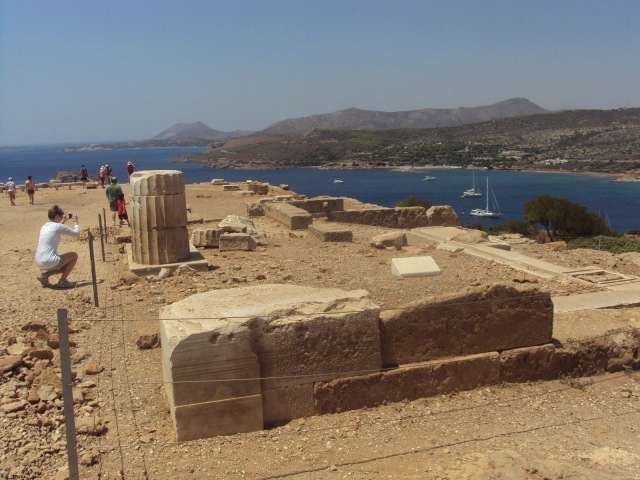 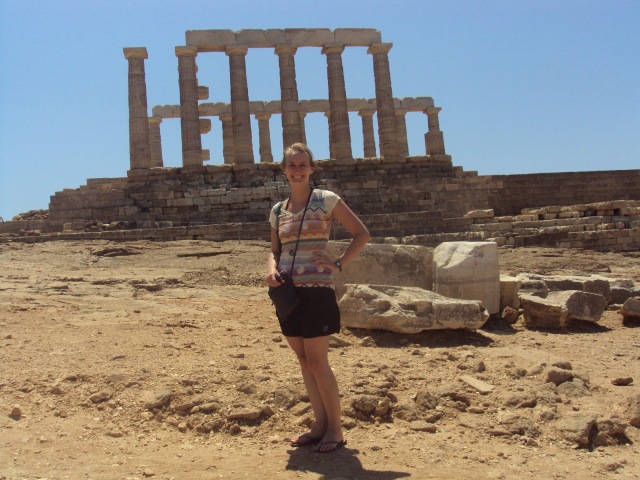 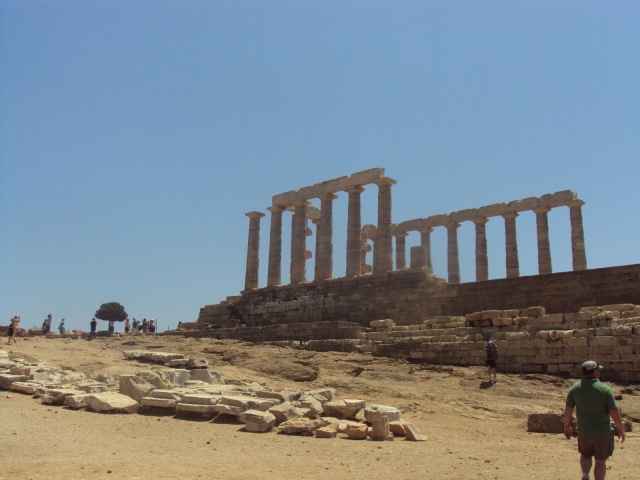 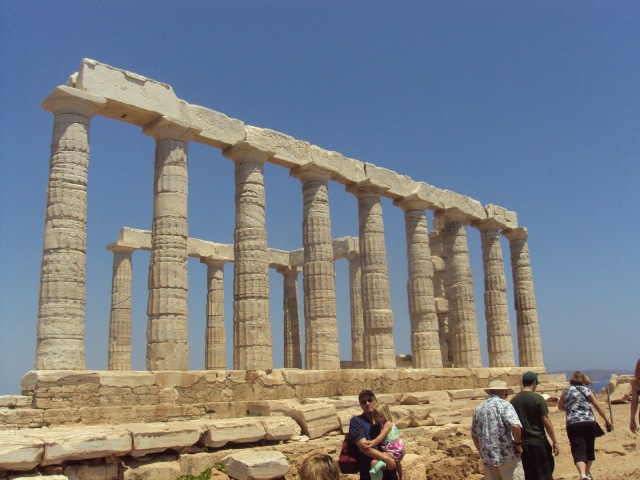 Supposedly Lord Byron, on his first Grand Tour to Greece, inscribed his name on the bottom of one of these columns. There’s not much evidence that it’s his real signature or anything, but it’s cool to know that these places really inspired incredible writers and legends like him.

NYC, Photo of My Day

Awhile back I entered a photo contest on one of my favorite websites, Beers & Beans. I figured it’d just be a good chance for me to give something new a shot; I’m not really a photographer (although I wish I were a better one), but I do love basic editing in Picasa and trying to capture little moments around me when I can. So, I entered the contest with little expectations, other than to participate.

I got 2nd Runner Up!

This is the photo that I posted, which I took during the 2010 Mermaid Parade on Coney Island in New York City. To this day it’s one of my favorite memories from my time in the Big Apple, and I had a hard time choosing among all the photos I had taken from that day.

Congrats to the winner, Pauline! (Her photo was actually my favorite when all the entries were posted…)

Photo of My Day, Scotland